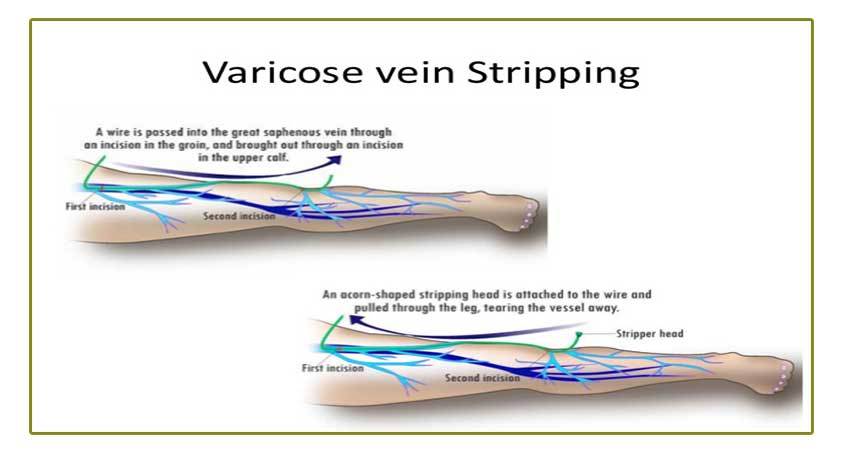 Vein stripping is an older surgical technique that treats varicose veins. Most of the new technologies have made vein stripping outdated and unnecessarily invasive.

Today, this treatment is used for veins that cannot be treated with Venefit or VenaSeal. Unlike other treatments that allow the body to naturally dissolve the diseased vein after the respective closure procedure, vein stripping removes the vein from the body.

What Happens During the Treatment

Vein stripping usually takes two hours and is done under a general anesthetic. The diseased vein is mapped along the patient's leg with the help of an ultrasound. Usually, a small incision of three to four centimeters is made at the groin. Afterward, another small incision is made by the knee.

The doctor pulls the diseased vein from the knee incision. They also make small incisions over prominent varicose veins before pulling them out. As the veins are pulled out, small branches along their side are torn. This causes bleeding that is controlled during surgery with the help of compression.

At the end of the surgery, your leg is wrapped with compression bandages to minimize bruising. The bleeding from the torn branches results in significant bruising and moderate pain after the surgery. After four to eight weeks, most of the bruising and pain is healed.

What are the advantages of Venefit or VenaSeal over vein stripping?

The more modern and noninvasive methods avoid the risks of general anesthesia as well as possible nerve injury, wound infection, incisions, or scars. Unlike Venefit and VenaSeal, which only takes one to two days before returning to regular activities, vein stripping may require as long as three to four weeks recovery period.

My surgeon only offered vein stripping. Do I still qualify for the new techniques?

What are the complications of vein stripping?

Complications are best reviewed with your surgeon before your procedure. These may include bleeding, nerve injury, blood clots, or wound infection.

Does OHIP cover the cost of vein stripping?

Ontario Health Insurance Plan (OHIP) no longer covers the cost of routine vein stripping. Only patients that meet the criteria of OHIP for severe venous disease despite aggressive compression therapy may qualify for coverage. Their conditions include ulcers, recurrent blood clots, and significant skin damage.

Some private companies may cover the cost of vein stripping. Consult your insurance plan provider to determine this. You may apply for financing by Medicard through our website today. Please visit Patient Financing page.

Can my varicose veins come back?

Your varicose veins may return as new veins are formed in place of the stripped vein. Other previously healthy veins may also become diseased over time, which leads to new varicose veins. While every patient is different, the average annual rate of recurrence is two to five percent. Take note that the recurrent veins may not be in the same location as your previous varicose veins.